I had good experiences as well as bad ones but I guess it’s all part of miscommunication and what you call “the challenge age”. 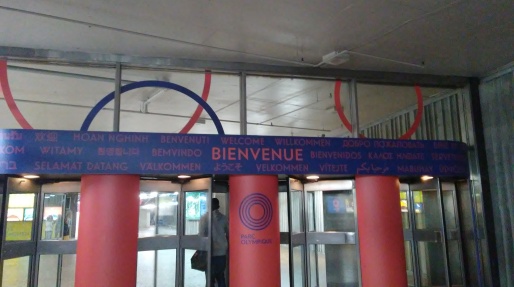 The first day that my mom and I visited the pharmacy near Drummond Street, we met this young woman that was working there. She greeted us with a “Bonjour…. Hi” to see whether we would comprehend the French Quebecquer accent. I responded with a “Bonjour”. After she scanned the items, she asked if that’d be all but because of her accent I couldn’t understand clearly so she guessed that we were foreigners. So she spoke to me in English and that’s when my mom intervened to ask her about the places we could go visit. She wrote a list for us and where they were located.My attempt in speaking French wasn’t necessarily the best but I could communicate with her as she asked me questions in French like where I was from and my interest in Quebec. Just as I was enjoying the moment in speaking and practicing another foreign language, I felt that my trip had a purpose. But not everything was colorful. Some were very demanding and expected more from a foreigner.

My mom and I needed tickets to navigate through the metro station. So I had to go to the booth and talk to the STM employer. Because I wanted to get a break from speaking French, I spoke to him and asked for the 2 passage Metro tickets. The problem was that this man didnt know how to speak English as he had difficulties when trying to understand so I began asking him in French that we wanted tickets for both of us but I didn’t specify how many passages and because he didn’t ask me he gave me tickets for one passage using a ticket that was different from the one that I had used regularly and so I asked him if it was the same ticket. He got really mad and impatient. He made faces as if he didn’t understand me at all. After getting the tickets I tried to pass by entering the ticket into the machine, it got denied and made faces at him like”what the hell happened?“ By that time at least 4 people were in line and a lady felt so bad for me that she even told him “her ticket won’t let get get by, let her pass” in French. At that moment I just wanted to cry. And I did in fact but I was stressed out because I kept wondering what I did wrong, what I said wrong